This is a laymans introduction for the curious Holidaymaker. Settlements can be traced back to the Bronze Age, 2000 B.C. There were little or no building materials on Menorca besides stone so people took advantge of the Island soft rock ( limestone ) and took shelter inside it ( caves ) or under stone roofs. Rarely hidden away, you will often glimpse them unexpectedly from the roadside, perhaps in the middle of a field, surrounded by feeding animals. These are the remains of the late-Bronze-Age Talaiot culture. Due to their abundance Menorca is often referred to as the mediteranen's largest open air museum.

All of Menorca's ancient Monuments - includes links to a wealth of expert information.

Visit late afternoons when the light is best and the heat of the day is over. They may have shut up the ticket office but often can still go in and visit - be respectful and leave a donation if a collection tin is available . Visiting on a Sunday is generally free of charge or a reduced fee

Construction of burial monuments such as megalithic tombs and the collective tombs known as navetas. Navetas which are unique to Menorca and the most well known of which is Navets des Tudons ( 4 meters high, 14m long and 6.4m wide ) which can be visited just outside Ciutadella. Built from huge stone blocks they resemble an upturned boat from which the name derives. They have a doorway into a burial chamber where along with the bodies of the dead offerings such as bronze or china figures were left.

By 1400 B.C. large stone constructions known as talayots (defensive structures) were being built. Hence this period is referred to as The Talayotic Period. At this time there was also a development of large settlements like Torre d'en Galmès , Torre den Salord, Trepucó and Son Catlar. Each settlement had a single taula ( T shaped stone ) thought to be a monument of worship but still today much debated. As you can see below these taulas are quite something. The tallest of which stands at 4m in at Trepucò.

A Taula is made from two carefully cut stone slabs with one balanced on top of the other. The T-shaped structures were sometimes fixed together with a mortise and tenon joint and still defy gravity to this day. 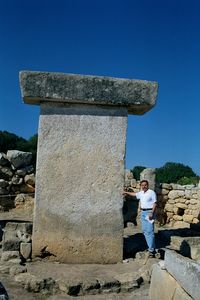 A Talayot is large 'tower' ( stone mound built using dry-stone walling techniques) contsructed it is though for observation . Talayots (the local word for 'watch-towers') were constructed in various styles : circular, square, and also stepped forms.