Menorca - Backdrop to your Holiday.

Holidays in Menorca - what to expect?

Menorca is different, a unique beach paradise close to home. It's a place that allows you to have fun, relaxation and mediteranean flair all without many of the compromises you find in so many other places.

Is it for you? Menorca is ideal for families, romantic and scenery seeking couples young and old who want the perfect beach holiday and more. It has purposely avoided the brashness and noise of mass packaged holiday resorts prefering a balanced mix of nature, relaxation and tradition.

Few holiday destinations have managed to retain their original charm, attraction and culture under the pressure of tourism. Menorca is one of the few exceptions and is typically less than a 2.5 hour flight from the U.K.

Menorca is considerably quieter than Mallorca or Ibiza, and so perhaps more suited to those with young families and couples wanting to combine beautiful beaches, scenery with select nighlife. Even the few purpose built holiday resorts are peaceful, as there is no over emphasis on loud nightlife. Menorca is rather more tuned into relaxation and rest than dancing into the early hours, but there are still plenty of places where you can let your hair down if you wish to.

Too often you will find that holiday destinations force you to make compromises. If you wanted safe beaches complete with all facilities then you would have to forget dreaming about lying practically alone on remote virgin beaches. If you wanted to enjoy sun filled mediteranean lifestyle, browsing and shopping, or dancing the night away then you would have to forget about walking or cycling in beautiful, ever changing landscapes, alive with wildlife and history.

Menorca was declared a UNESCO Biosphere Reserve in 1993 and is the best preserved natural paradise in the whole Mediterranean. The island has a natural park, five natural Reserves, a marine reserve and nineteen ANEI zones (Natural Areas of Special Interest). If you enjoy an active holiday and love nature Menorca is worth a closer look.

Menorca in Pictures - a taste of what to expect. Island Gallery

Everyones' tastes are different and Menorca offers a wonderful and perhaps surprising buffet of beaches, shopping, nightlife, cuisine, activities and landscapes. The great thing with Menorca is you can pick and choose, nothing is very far away. In fact Menorca is the resort, not just the location of your Holiday Home.

The island is truely a tale of two cities - Ciutadella at the far west and Mao( Mahon ) at the far eastern end of the island. There is friendly rivalry between these two Cities, which is good for the visitor as they both have a charm all of their own and trying to out do each other with what they offer. Ciutadella's centre is very "elegant 16th century Spain" with its narrow streets and former landowners palaces. Mao / Mahon is more modern with lots of Georgian and Jugendstil elements in its architecture - perhaps a touch more international and cosmopolitan as the prefered location for big yachts. Both are defined by their picturesque harbours, bloody histories with invaders and BOTH are definitely well worth a visit.

Due to the island's geology and it's compact size, just 48 Km long and 20km wide, wherever your Holiday Hotel, villa or Apartment is located you are never more than 8 k.m away from the next beach!. Menorca has more beaches than Majorca and Ibizia combined! And these are not man made beaches, surrounded by densely packed concrete blocks, but places of great natural beauty and sparkling turquoise waters.

Seen "naked" you can see just how sparsely populated Menorca is, which means there is a lot of natural spaces to enjoy 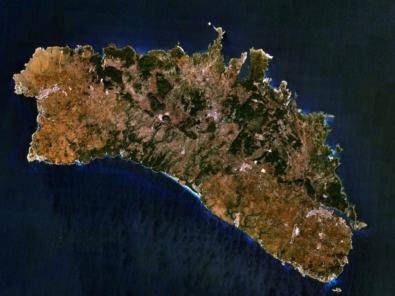 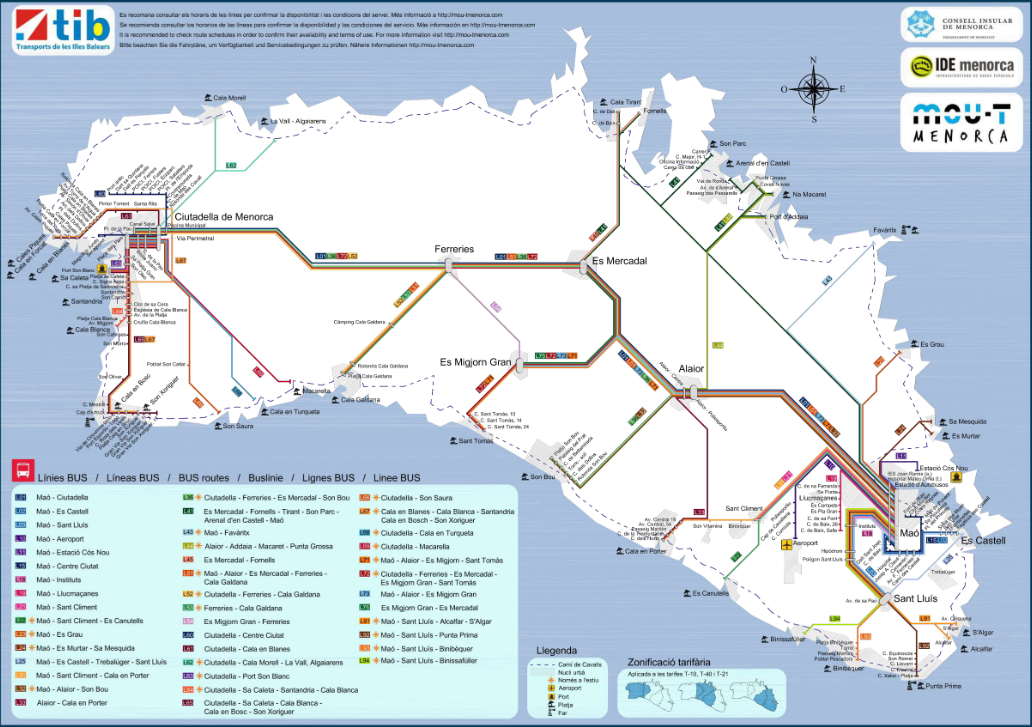 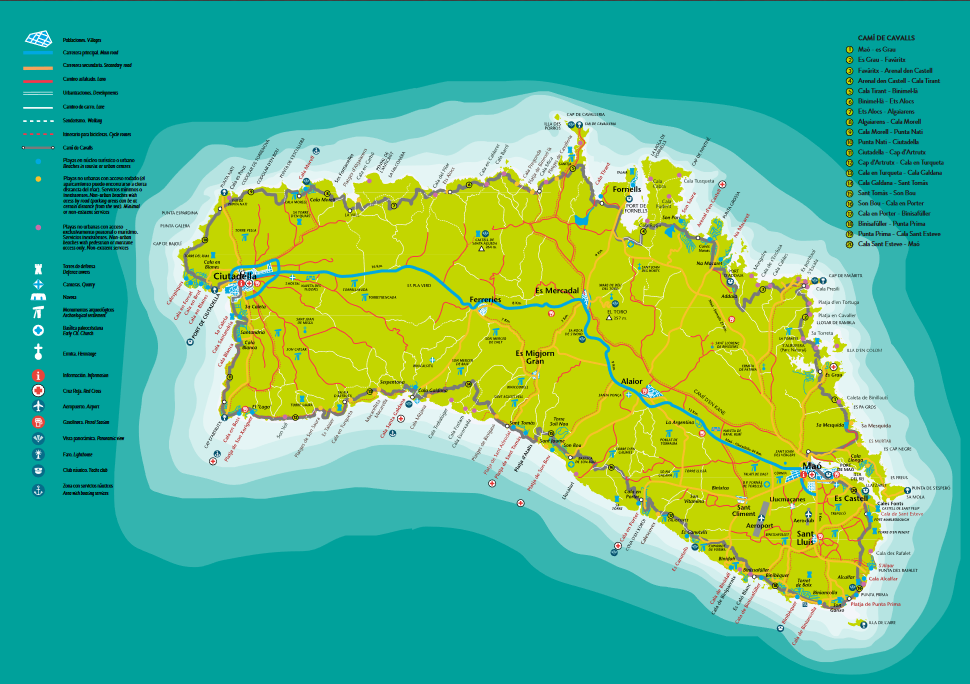 Due to its volcanic origins and ancient river systems the landscape on Menorca varies richly in such a compact area. The harder stone in the north is tinged red and characterises the northen cliffs and the red tinged beaches of the northern coast. The south is dominated by beautiful valleys that formed when rivers from the center flowed south through the softer limestone regions. Often these old, some now extinct rivers, have left behind beautiful deep gorges ending in "paradise beaches" where they reached the sea. They formed small hidden and larger bays of breathtaking beauty fringed by pine tree claded cliffs. Often you'll find somewhere at the back of the beaches the "stream" that was the original river. Fabulous examples of this are the beach at Cala d'en Porter and Cala Galdana.

Not only is the rythmn of life here very different but also the culture is different - very traditional while embrassing the modern. When things don't go as expected then STOP! smile and then it will all work out. The Islanders are very friendly. Those that are not are probably seasonal workers from outside!

Clothing is important here, particularly when going out or eating. Too many holidaying "brits" are badly dressed. Football shirts are for small boys and the football pitch. Men leave them at home please!

You will enjoy the most memorable holiday when you slip into the local timestyles. Take in the morning early, take siestas to keep out of the heat and re-charge your energy banks. And stay up late even with small children. Dont make excuses re children - Its only YOU stopping your children from doing this. All the locals will be out "late".

By way the correct name is Minorca (in english) "small island" which lies next to the "big island" Majorca as they were named in Roman times. In spanish it is written Menorca.